The fashion and clothing of the Middle East represent a mixture of influences from diverse cultures and time periods in history, which has produced a style of dress that is modern but remains recognizable as its traditional design. The most influential products of the time were textiles; flexible material consisting of natural or artificial fibers. Textiles are formed by weaving, knitting, crocheting, knotting, felting, and braiding. They were used to create a variety of things, such as clothing and decor, for example, camel hair and goat hair were used frequently to weave soft and very beautifully patterned shawls. 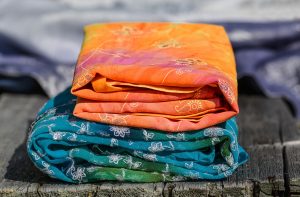 For a long time, the Middle East was known as the center of Eurasian textile production and trade, and these markets were the center of clothing and decor design. Textiles were highly valued goods and were a huge part of life. They were accepted as tribute instead of taxes in some areas and gifts of textiles and garments were presented to honor officials or visiting ambassadors. Textiles were not only used for the clothing of the time but interiors were also primarily furnished with textiles, using them to cover floors, walls, cushions, as well as to create beds. Gifts were often presented in a textile wrapper, and the more elaborate the workmanship of the wrapper the greater the honor intended. 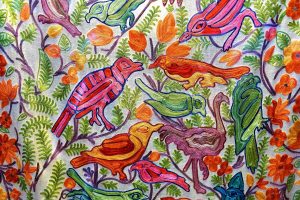 Embroidery has been used for centuries to embellish fabrics all over the world, and it was very popular to embellish textiles in cultures throughout the Middle East. Textiles and fabrics were thought to have the power to protect or harm, so it was popular to incorporate inscriptions and symbols into them.

Traditional Tiraz embroidery was very popular, textiles would be embellished with borders containing inscriptions, usually embroidered, or tapestry woven in gold thread. These borders appear most commonly as bands on the upper sleeve, but were also used on the edges or in the body of the garment, this style can still be seen in clothing today. They were also found on burial shrouds and ceremonial textiles. The inscriptions usually included the name of the current ruler as well as religious quotations. Tiraz embroidery could also be informative; with the specificity and color of the style revealing much about the wearer. For example, the geometrical patterns found on a dress can symbolize good health, prosperity, protection or marital status. 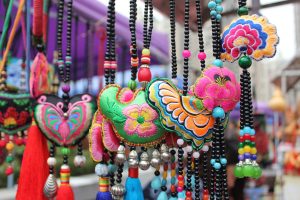 In the past embroidery occupied a special role in a village woman’s daily life. After a long day’s work in the fields, women would embroider with friends and daughters, all afternoon and until evening, passing on the tradition to the modern day.

There are many defining traits of Middle Eastern fashion; vibrant colors, detailed patterns, and beautifully embroidered edges being some of them. Today many traditional items, such as Kaftans, have been altered for a modern look but they are still recognizable as Middle-Eastern.